A week ago if I was told that for the next few weeks all I’ll have to do would be eat, sleep and repeat, it would have felt like a vacation. But the reality is stranger and much sadder than fiction. The quarantine break now feels like house arrest with nothing much to do. So, the best way to spend time would be to watch some movies, right? But then even a bigger problem arises of what to watch. So, here is a carefully curated watchlist of movies with pandemics and outbreaks as premises so as to kill your time but not the prevailing atmosphere.

On a serious note, these movies would be quite informative for the current scenario and will give you some idea of what goes on around the world in various sectors including military and science, while we sit inside our houses. Having said that, I would not suggest you to blindly believe what you see in these movies and double-check your questions with a reliable news source.

The most talked-about movie right now and all for the right reasons. Over the past month, the Steven Soderbergh 2011 thriller has been near the top of every digital streaming bestseller list. Ever since news broke out regarding the novel coronavirus, people couldn’t stop themselves from viewing the classic because of them being eerily similar. The symptoms, host, and origin in the movie are all the same as COVID-19. The movie skillfully depicts how diseases spread, the challenges in finding an antidote and the way conspiracy theorists and incompetent or spiteful authorities can slow down the entire process. With a stellar star-cast and exceptional acting skills, this movie feels way too real.

In the 2007 movie, Smith plays a US Army virologist in a world where most of the humankind has been wiped out by a deadly man-made virus that transforms people into ruthless mutants. The virus was originally created to cure cancer but it backfired leaving Smith to be the last living man in New York. He strolls the streets to shouting to find more survivors and tries to develop a cure as he is immune to the virus himself. All this while defending himself against the hostile mutants. Goosebumps! 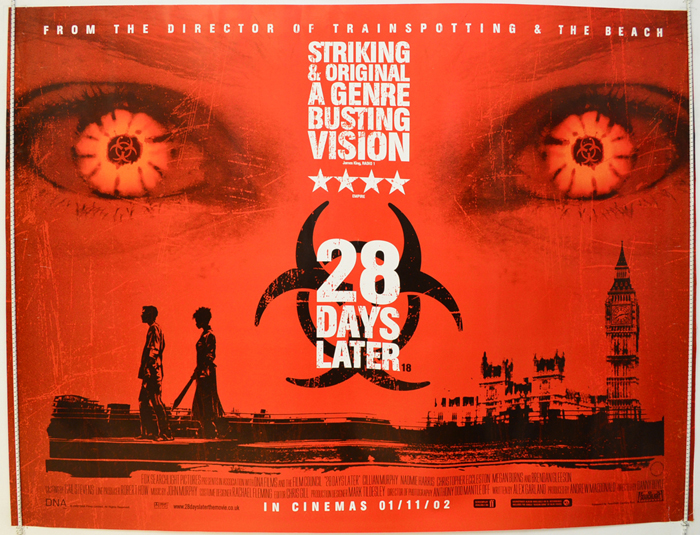 Set in the aftermath of a post-apocalyptic London when a group of animal rights activists free a caged chimp contaminated with a deadly virus from a research lab. This is a must-watch movie in every aspect. When a bike courier Jim wakes up from a coma ’28 days later’, he finds the city all but deserted. On the run from the zombie-like victims, he stumbles upon a group of survivors, including Selena and cab driver Frank, and joins them on a dangerous journey to safety. This 2003 movie will make you thank heavens that Coronavirus isn’t as bad as ‘rage’.

It is the sixth most-watched show currently on Netflix and why not! A veterinarian finds herself in the middle of a horrifying pandemic where earthlings are infected with a terrible deadly disease. Now, in order to save the world, she must pair up with a strange conspiracy theorist to discover the real source of the threat. It is a mini-series with only 6 episodes which you can easily complete in one sitting. The series shows a very authentic side to what really goes on in the research labs when a situation like that arises. It makes you respect the medical professionals and their hard work which tirelessly goes on to prevent the virus from becoming a global outbreak.

The 2019 sci-fi movie “3022,” about astronauts stranded on a space station after Earth is destroyed was the ninth most-watched movie this month. It makes your darkest fears come true with its terrifying plot where the astronauts are left with a dubious future as the humankind has been eradicated. Though the story is set somewhat closer to the present, 2190 to be precise than what it appears from the title. The movie makes you want to make the planet a better place to live in for future generations.

Aarogya Setu App: All you need to know About

How to start basic weight training at the gym early to...

Controversial topics that flared up unnecessarily on social media!

The best live cams on YouTube which help you sneak peek...